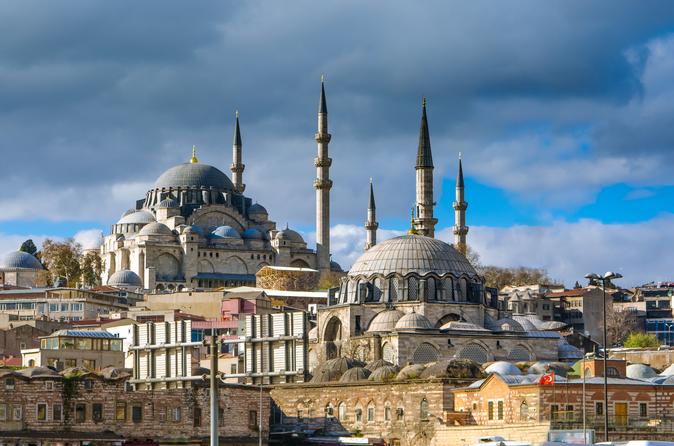 Visiting the most important monuments of Constantinople and Istanbul the Little Hagia Sophia, Suleymaniye Mosque and Grand Bazaar.

Your acquaintance with Istanbul will begin with a pick-up from your accommodation and then travel by coach to the Little Hagia Sophia. For one thousand years, the walls of the church of St. Sergius and St. Bacchus breathed Byzantine prayers that sought the help of the saints. However with the conquest of Constantinople many changes occurred to Byzantine buildings and the church was turned into a mosque known as Little Hagia Sophia. Although time can erase the past, the memories of Saint Sergius and Saint Bacchus persist across the centuries, as does their image of holiness and unwavering faith.

Then you will continue your tour and visit the Suleymaniye Mosque, the most ambitious architectural complex in the history of Ottoman Empire. This is the world’s greatest stone building of the Ottoman Empire and it can be difficult to describe the feelings it gives to the visitor. In the mosque’s complex, Sinan included four schools, a dining room, bath, hamam, caravanserai, a hospital and a tomb that became Sultan Suleiman’s final resting place.

After you will visit the Grand Bazaar. Your guide will explain you lots of interesting things about the oldest market in the world. Every morning, shop owners open the doors of their shops as they have done for nearly 600 years. Now it is the biggest market in the world, consisting of five thousand stores over 58 streets and serving a quarter of a million visitors every day. And it still sells many of the goods that originally attracted travellers and merchants from the around the world such as oriental rugs, diamonds, crystal, jewellery and glass. Enjoy your time by visiting different shops with especial atmosphere of East. Finally you will back by coach to your accommodation.

Visiting the most important monuments of Constantinople and Istanbul the Little Hagia Sophia, Suleymaniye Mosque and Grand Bazaar.