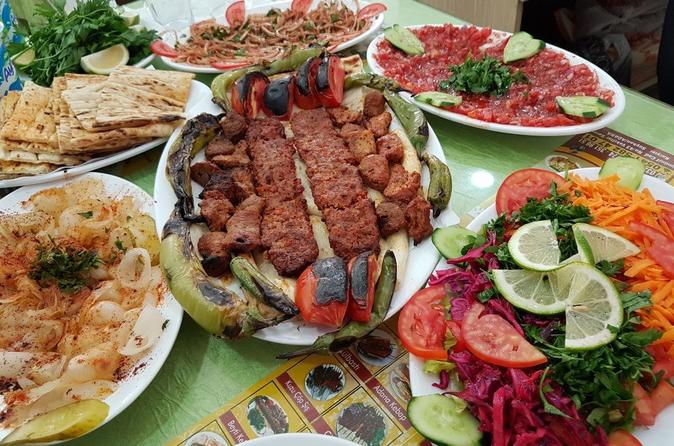 Do you like Turkish Kebab? if your answer is "yes" you should try kebaps of Adana City with a daily tour from istanbul.

Early in the morning we will arrange an airport transfer from your hotel and morning flight to Adana City . our guide will meet you at Adana airport and we will start our food and sightseeing tour in Adana.  Our first stop for breakfast is Birbicer Liver kebap salloon:  this experience will not be a regular breakfast, your breakfast will be grilled livers on skewer . after this extraordinary experience we will start the sights of Adana City :
Grand Mosque :
Grand Mosque is an ancient 16th-century mosque in Adana, Turkey, located besides the Ramazanoglu Hall on Kizilay street. Construction of the mosque was started in 1513 and was completed in 1541. The building of the mosque was affected in 1998 by an earthquake and then was restored in 2004. The design of the building represents the ancient Ottoman architecture. Beautiful minarets display the influence of Mamluk art, in which the exterior is decorated with attractive two colored stones. The mosque has an ancient great Madrassah in its east, which is beautifully decorated in Ottoman architecture.

Buyuk Saat Buyuk Saat ( Big Clock)
is a 32-meter high ancient clock tower, situated in the old town of Ali Munif Caddesi, Adana. It is the highest clock tower of Turkey. The clock tower was built in 1882 as a sign of modernization. The architecture of the tower is a square prism and side walls are built with the bricks. The architecture was designed by two Armenian architects. The tower was harmed in French invasion and was restored by the Turkish Government in 1935. A loud bell rings every hour from this clock tower, which can be heard in different parts of the city. People manage their office hours and prayers timings by this clock time. Authorities are planning to expand the sideways of the tower for the ease of pedestrians and visitors from all over the world who visit here to see this amazing clock tower.

Tas Kopru is an ancient Roman stone bridge built over the Seyhan River in the 2nd century AD. This bridge is associated with the huge historical importance,  This bridge is known as the oldest stone bridge, which was opened for the traffic and later in 2007 only pedestrians and cycles were allowed instead of motor vehicles. Many social and cultural events are hosted on this bridge. Spectacular views of beautiful central mosque enhance the delights of the walk on this bridge. It is one of top most attracted place for the tourists in Adana.

After sightseeing we will go to the Istah kebap restaurant to have lunch. our lunch is called jet kebab ( minced meat kebab on skewer)

after lunch time we will go to Dogan Kaymak to have our delicious creamy kadayif sweets.

during the tour we will take you to the Kazim Bufe for fresh milk with bananas.

end of our will take you tho the guide for your evening flight to Istanbul. on arrival transfer to your hotel

Do you like Turkish Kebab? if your answer is "yes" you should try kebaps of Adana City with a daily tour from istanbul.