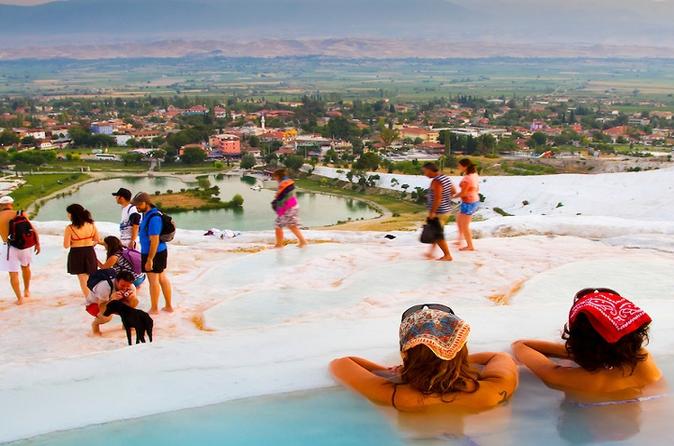 Day 1
Pick up at 06:30 – 07:00 from your hotel in the old city of Istanbul and depart for afternoon tour of Gallipoli. The World War I battlefields of Gallipoli are now a serene site. Visit the Lone Pine Australian Memorial and Chunuk Bair New Zealand Memorial, ANZAC Cove, Brighton Beach, Beach Cemetery, Ari Burnu Cemetery, Johnston’s Jolly, 57th Regiment Turkish Memorial and The Nek.Overnight Çanakkale 3 star Anzac Hotel
Day 2
We will visit the minelayer, Nusret, and Cimenlik Fortress in the morning. After lunch, step back in time today as we visit Troy, famous for the legendary Trojan Horse from the times of beautiful Helen, the Queen of Sparta, and Paris, the Trojan Prince. Transfer to Selcuk. Overnight.
Day 3
In the morning pick up from hotel join to Ephesus tour visit to; Temple of Artemis: was one of the Seven Wonders of the World and located in Ephesus. Throughout the excavations in Ephesus, the actual location of the temple was presumed in different places. Its ancient cult dedicated to Artemis was famous in antiquity and made ancient Ephesus a much-visited pilgrimage place. LUNCH The House of Virgin Marry: It is known with certainty That the Virgin Mary went to Ephesus and lived there for some time.
Day 4
In the morning pick up from the hotel join Pamukkale tour . Once known as Hierapolis which is famous with its healing thermal / mineral Baths beautiful snow-white “petrified waterfalls". After lunch visit Hierapolis, including the magnificently preserved Necropolis, the main Street and Gates, the thermal Baths and Masterpiece Theater. At the end of the tour transfer to bus station and night bus to Cappadocia.
Day 5
Arrive Cappadocia in the morning. , transfer from bus station join to tour visit to; Devrent Valley: Walk through this amazing valley where different fairy chimneys formations can be seen. Pasabag The name was derived from some cones carved in tuff stones which stand apart. Avanos: on the banks of the Kızılırmak River in Cappadocia is all about pottery-making. LUNCH Goreme Open Air Museum: The Goreme Open-Air Museum resembles a vast monastic complex composed of scores of refectory monasteries placed side-by-side, each with its own fantastic church.
Day 6
Breakfast at hotel. Pick up from your hotel join Cappadocia Tour at 09:00 am visit to; Red Valley : The Red Valley is one of the most spectacular valleys of Cappadocia with its different kind of rock formations in variety colors Cavusin, Pigeon Valley : You will stop on the outskirts of Goreme village and look down into Pigeon Valley to see the centuries old pigeon houses carved from the cliffs. LUNCH Kaymaklı Underground City : Kaymaklı is one of the largest underground settlements in the region. Bus to Istanbul at 20:30 pm. Next day morning arrive to Istanbul.