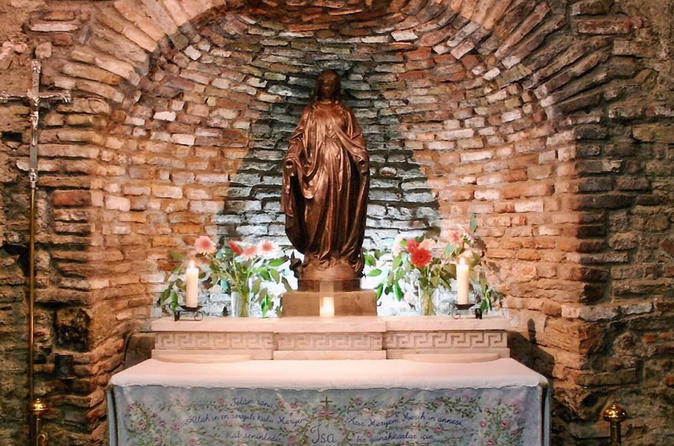 The pick up time is between 05.00am and 05.30 am from the hotel in Istanbul. You will flight to Izmir and meet with your private guide and driver in Izmir airport. After met with your guide and driver, you will drive to Bulbul mountain where the House of the Virgin Mary is located in a nature park between Ephesus and Selcuk, which is believed to be the last residence of the Virgin Mary, mother of Jesus. The peaceful site is sacred to both Christians and Muslims, and is visited by many tourists and pilgrims. This House was later visited by Popes Paul VI and John Paul II, who confirmed its appropriateness as a place of pilgrimage. On November 29, 2006, Pope Benedict XVI celebrated mass here. The next visit is Ephesus Ancient City. Famous in antiquity for its Temple of Artemus during the years of the Roman Empire, the Greek port of Ephesus became the greatest city in Asia Minor. You will start your Ephesus walking tour at the upper Magnesia Gate, and work your way down through the city, ending near the ancient Harbor. Along the way you will See the Odeon, the Fountain of Trajan, the steam baths of Scholastika, the temple of Hadrian and the impressive library of Celsius. The library is adorned with columns and statues. The Grand Theater, where St. Paul preached, is the largest theater in antiquity with a capacity of 24,000 seats. You will return to your private vehicle through the Arcadian Way, where Mark Anthony and Cleopatra once rode in procession. After the termination of the visit to Ephesus, You will continue to the Basilica of St. John. It is believed that the evangelist St. John had spent his last years in the region around Ephesus and was buried in the southern slope of Ayosolug Hill. Three hundred years after the death of Saint Paul, a small chapel was constructed over the grave. The chapel was replaced with a marvelous basilica during the region of Emperor Justinian (527-565 A.D.). The monumental basilica was in the shape of a cross and was covered with six domes. Its construction, being of stone and brick, is an extremely rare find amongst the architecture of its time. Raised on two steps and covered with marble, the tomb of St. John was under the central dome. Afterwards you drive back to Izmir airport for flight back to Istanbul. Our Istanbul team will met you at the Istanbul airport and transfer you to your hotel in Istanbul.