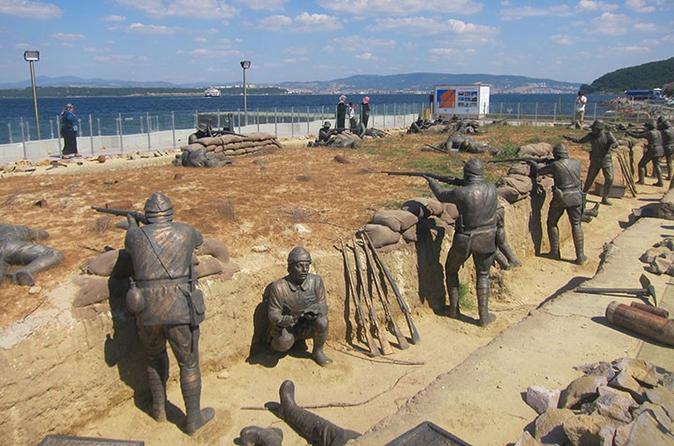 Spend the day exploring historic Gallipoli. Travel back in time and see the infamous battlefield from WW1, still remembered today as ANZAC day. Learn about the great battle at the Kabatepe Museum.

Today, we travel to the WW1 battlefields of Gallipoli. Here, we'll embark upon a guided tour of the region, once the site of fierce fighting and today almost hauntingly beautiful, with its wooded landscape dotted with understated memorials to the war dead. Our guided tour of the region will take in sights such as Lone Pine Australian War Memorial and cemetery, Chunuk Bair New Zealand War Memorial and cemetery, the Nek, Johnston's Jolly and the many fortified trenches still clearly visible amongst the scrub after all these years. Roughly 3 feet deep, the system of trenches provided much need safe cover for troops as they desperately fought the enemy.

We'll also visit the small Kabatepe Information Centre and Museum - a museum of modest proportions which exhibits period uniforms, weapons, copies of letters from servicemen and other poignant personal possessions. Outside the small museum are some memorial gardens and top views of the peninsular memorials dotted across the landscape.

The slender peninsula that forms the northwestern side of the Dardanelles, across the water from the town of Canakkale, is called Gallipoli. For a millennium it has been the key to İstanbul - the navy that could force the straits had a good chance of capturing the capital of the Eastern European world.

Many fleets have tried to do so. Most, including the mighty Allied fleet mustered in WW1, have failed. Today, the Gallipoli battlefields are peaceful places covered in scrubby brush, pine forests and fields. But the battles fought here nearly a century ago still live in the memories of many people, both Turkish and foreign, and the annual pilgrimage that Australians and New Zealanders make here on Anzac Day (25 April) has become one of the major events on the Turkish tourism calendar.

Gallipoli is a fairly large area to tour: It's over 35km as the crow flies from the northernmost battlefield to the southern tip of the peninsula. The principal battles took place on the western shore of the peninsula near Anzac Cove and Arıburnu Cemetery, and in the hills just to the east.

18:00 We return to Istanbul in the evening arriving back at approximately 23:00 hours. (L)

Spend the day exploring historic Gallipoli. Travel back in time and see the infamous battlefield from WW1, still remembered today as ANZAC day. Learn about the great battle at the Kabatepe Museum.