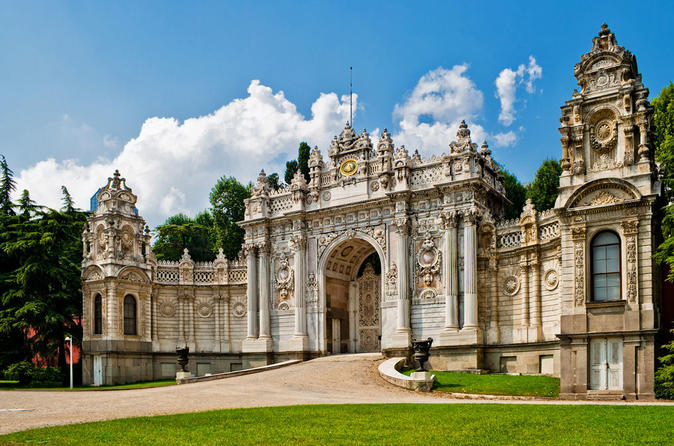 Dolmabahce Palace-Situated on the Europian shores of the Bosphorus. It was built between 1843-1856. by Karabet Balyan, the architect of Sultan Abdulmecid with elements of roccoco, baroque style. The palace witnessed some od key events in Turkey’s recent political history. In 1877. The First Parliament convended in the Grand hall. Ataturk died in the room number 71.

Royal Garden of Dolmabahce Palace-Beautiful garden where you can walk and enjoy in the view of palace and Bosphour.

The Clock Tower-Stands in front of Dolmabahce palace. It was built during reign of Abdulhamit II. Clock tower such as this in that period were built to inform people when is time for praying.

Lunch (Drinks are extra)-You can choose kebab, pide, desert such as baklava and other delicious Turkish traditional food.

Pierre Loti Hill-Located in Eyup, district of Fatih, on Europian side of Istanbul. The name was given by French author of famous novel ‘’Aziyade’’. It is said that the Aziyade was the name of Ottoman woman who Pierre fall in love. The name of hill was given by him because of his support to the Ottoman Empire. On the hill there are tea houses, restaurants with panoramic view of old and new part of Istanbul.

Golden Horn (by bus)-It has long been a natural harbour of the city, and favoured meeting of the sweet waters.

City Walls (Byzantine Walls by bus)-Were built by Constantine the Great, they have surrounded and protected the city of Constantinople.