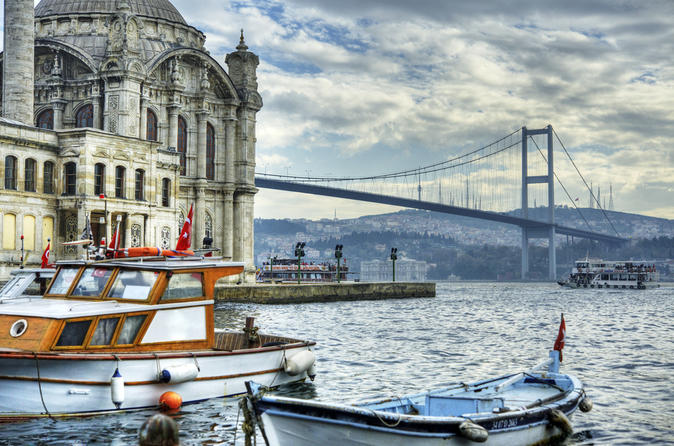 Enjoy a full day guided group tour of the Bosphorus District , the most charming part of the city of Istanbul. Get freshened up during an 1.5 hour Cruise on Bosphorus with a guided explanation of the bridges & monuments. Discover the Beylerbeyi Palace, which dates back to the 19th century of the Ottoman Empire on an extensive guided tour.

After a morning pick-up at your hotel, your half-day program starts out with the City Walls. The first breach of the walls was by the Fourth Crusade in 1204,  and the second by the cannons and troops of Sultan Mehmet the Conqueror in 1453.

Afterwards, you'll drive by bus to the Golden Horn. As natural and extremely secure harbor, the Golden Horn has played an important role in the development of Istanbul. The inlet separates the European shore into two. It is approximately 8 km long, and the widest part is the entrance from the Bosphorus. Two streams drain into this inlet at its far end.

You'll next visit the Spice Bazaar (Egyptian Bazaar). The air here is filled with the enticing aromas of cinnamon, caraway, saffron, mint, thyme and every other conceivable herb and spice.

Afterwards, it's time for a boat trip on the Bosphorus. A traditional excursion by boat along the waterway separating Europe and Asia. The shore is lined with old wooden villas, palaces of marble, fortresses, and small fishing villages. During the excursion you will pass the magnificent Dolmabahce Palace, and further along, the parks and imperial pavilions of Yildiz Palace. On the coastal edge of this park, is Ciragan Palace, 300 meters of is marble facade faces the shore. At Ortakoy a great variety of artists gather every Sunday to display their work along the street. Ortakoy is a symbol of tolerance with a church, a mosque and a synagogue existing side by side for centuries. After your cruise tour, you'll have lunch at selected restaurant.

From the sea, you'll be able to observe the Rumeli Fortress. Built by Mehmet the Conqueror in 1452 prior to the conquest of Istanbul, was completed in only four months to control and protect Bosphorus. It is one of the most beautiful works of military architecture anywhere in the world.

Next you'll visit Beylerbeyi Palace. This summer residence of Ottoman Sultans stands with its original furniture and magnificent gardens intact. (Beylerbeyi Palace is closed on Monday and Thursday; on those days, it will be replaced with a visit to Chora Church)

You'll be able to walk the famous Bosphorus Bridge, a unique chance to step from one continent (Asia) to another (Europe).

Afterwards you'll travel to the highest point in Istanbul, Camlica Hill. At the top of it you can rest and admire the magnificent panorama of Istanbul and the Bosphorus from the beautiful gardens, landscaped in a traditional style.

Lastly, will be some free time provided for shopping at Bedesten before your return transfer. This bazaar exhibits the traditional silk weaving girls at the carpet weaving courses authorized by the Ministry of National Education. You may have time to possibly see jewellery, handicrafts center and a leatherware show.

Enjoy a full day guided group tour of the Bosphorus District , the most charming part of the city of Istanbul. Get freshened up during an 1.5 hour Cruise on Bosphorus with a guided explanation of the bridges & monuments. Discover the Beylerbeyi Palace, which dates back to the 19th century of the Ottoman Empire on an extensive guided tour.