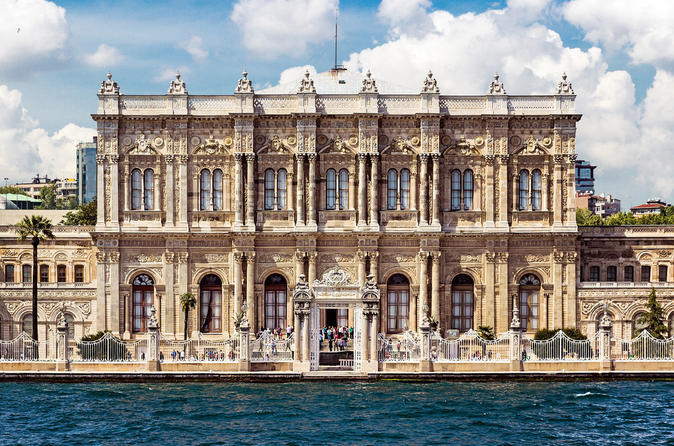 • Enjoy a Half Day guided group tour of the Bosphorus District which is the most charming part of the city of Istanbul.
• Enjoy bosphorus cruise and get chance to see Dolmabahce palace from distance.

Enjoy a Half Day guided group tour of the Bosphorus District which is the most charming part of the city of Istanbul.
Upon our pick up from the hotel and see ;

Dolmabahce Palace: which in the 19th century was the principle residence and the administration center of the Turkish Ottoman Empire. With its splendor baroque exterior and mixture of traditional and European interior decorations it is a reminder of the formidable Ottoman Empire.

Bosphorus bridge:Get the unique chance to drive from Europe to Asia with a breathtaking view of the bosphorus.This was first bridge to connect both continens and it was open on the 30th of october 1973.It took 3 years to be fisnished.

Spice Bazaar(Egyptian Bazaar): The air here is filled with the enticing aromas of cinnamon, caraway, saffron, mint, thyme and every other concievable herb and spice.

Rumeli Fortress:Rumelihisari (also knowen as Rumelian Castle and Rumeli Hissar Castle is a fortress located in the Sariyer district of Istanbul,Turkey,on a hill at the European side of the Bosphorus.It gives the name of the quarter around it.It was built by the Ottoman Sultan Mehmed ll between 1451 and 1452,before his armys conquest of Constantinople.The three great towers were named after three of Mehmed ll viziers:Sadrazam Candarli Halil Pasha,who built the large tower next to the gate;Zaganos Pasha,who built the South tower and Sarica Pasha who built the North tower.)
Bosphorus Cruise: A traditional excursion by boat along the waterway seperating Europe and Asia. The shore is lined with old wooden villas, palaces of marble, fortresses, and small fishing villages. During the excursion you will pass the magnificent Dolmabahce Palace, and further along, the parks and imperial pavillions of Yildiz Palace. On the coastal edge of this park, is Ciragan Palace, 300 meters of is marble facade faces the shore. At Ortakoy a great variety of artists gather every Sunday to display their work along the street. Ortakoy is a symbol of tolerance with a church, a mosque and a synagogue existing side by side for centuries.
Rustempasa Mosque:Rustem Pasa died in July 1561 and the mosque was built after his death from around 1561 untill 1563.The mosque complex hosts now a religious school.

• Enjoy a Half Day guided group tour of the Bosphorus District which is the most charming part of the city of Istanbul.
• Enjoy bosphorus cruise and get chance to see Dolmabahce palace from distance.