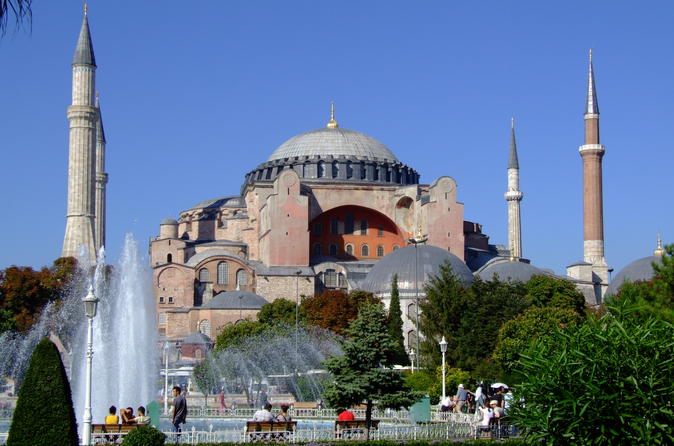 Try out your bargaining skills at the Grand Bazaar

Tour the inside of Dolmabahce Palace, home to the last Ottoman sultans

Admire the Bosphorus Bridge, which connects Europe and Asia

For many centuries, this was the largest church in the world, and it still boasts the 4th largest dome after St. Paul's in London, St. Peter's in Rome and the Duomo in Florence. Dedicated to the Hagia Sophia or 'divine wisdom', it is one of the greatest surviving examples of Byzantine architecture.

Move on to the Blue Mosque, more officially known as the Sultanahmet Mosque. The mosque’s striking blue tiles give it its more common name and make it one of Istanbul’s most iconic attractions. Located close to Topkapi Palace, Sultanahmet Mosque was considered the Supreme Imperial Mosque in Istanbul.

Your day won’t be complete, however, without a visit to the Grand Bazaar, one of the largest and oldest covered markets in the world. With hundreds of small handcraft shops selling everything from handmade carpets to Turkish coffee, the atmosphere is electric, and it's a great place to try out your bargaining skills.

The spice bazaar is located in Fatih. It's known as the Egyptian Market because, during the Ottoman period, Egyptian exports were sold there. The Bosphorus is a narrow, navigable strait between Europe and Asia that connects the Black Sea to the Marmara Sea.There are also magnificent Ottoman palaces and mosques along the Bosphorus. Keep an eye out for them!

Built in the 19th century, Dolmabahce Palace was the administrative center of the Ottoman Empire and housed some of the last Ottoman Sultans. The palace site was created by filling in the small bay on the Bosphorus.

Try out your bargaining skills at the Grand Bazaar

Tour the inside of Dolmabahce Palace, home to the last Ottoman sultans

Admire the Bosphorus Bridge, which connects Europe and Asia