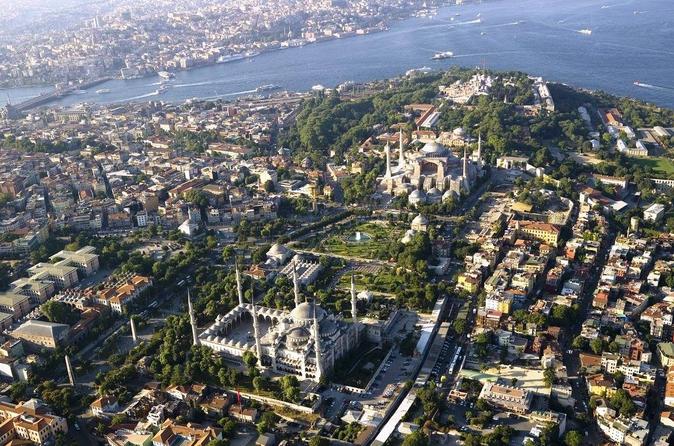 This is a Half Day Guided Tour Which is suggested to the Cruisers.
During this Skip The Line Tour you will see St. Sophia, Blue Mosque, Underground Roman Cistern and The Grand Bazaar.
Explore the local sites of Istanbul and visit some of the most renowned architecture and its surroundings.

After pick up from the Istanbul Cruise Pier we will drive you to the Old City Where you will discover this monuments :

St. Sophia ( Hagia Sophia ) (Aya Sofya) is a truly awe inspiring, 1,400 years old Byzantine cathedral which houses mosaics, relics and iron work. Hagia Sophia was, for nearly a thousand years, the largest enclosed space in the world, and is still seen as one of the world's most important architectural monuments. It is one of Turkey's most popular attractions, drawn by the sheer spectacle of its size, architecture, mosaics and art. It was built during the reign of Byzantine Emperor Justinian in the 6th century AD.

The Cistern This subterranean structure was commissioned by Emperor Justinian and built in 532. The largest surviving Byzantine cistern in İstanbul, it was constructed using 336 columns, many of which were salvaged from ruined temples and feature fine carved capitals. Its symmetry and sheer grandeur of conception are quite breathtaking, and its cavernous depths make a great retreat on summer days.

Like most sites in İstanbul, the cistern has an unusual history. It was originally known as the Basilica Cistern because it lay underneath the Stoa Basilica, one of the great squares on the first hill. Designed to service the Great Palace and surrounding buildings, it was able to store up to 80,000 cu metres of water delivered via 20km of aqueducts from a reservoir near the Black Sea, but was closed when the Byzantine emperors relocated from the Great Palace.

Blue Mosque (Sultanahmet Mosque - Camii) built during the reign of Sultan Ahmet I during 1609-1616. It is the only mosque in Turkey with six minarets. Due to its magnificent hand-dyed blue, green and white Iznik tiles it has been named the "Blue Mosque" by Europeans. The central dome is 43 m in height and is 33.4 m in diameter; it also boasts 260 windows.

The Grand Bazaar (Kapali Carsi) is one of the largest and oldest covered markets in the world, with more than 58 covered streets and over 1,200 shops. Opened in 1461, it is well known for its jewelry, pottery, spice, and carpet shops. Many of the stalls in the bazaar are grouped by the type of goods, with special areas for leather coats, gold jewelry and the like. The bazaar contains two bedestens (domed masonry structures built for storage and safe keeping), the first of which was constructed between 1455 and 1461 by the order of Sultan Mehmed the Conqueror. The grand bazaar consists of 12 major buildings and has 22 doors.

This is a Half Day Guided Tour Which is suggested to the Cruisers.
During this Skip The Line Tour you will see St. Sophia, Blue Mosque, Underground Roman Cistern and The Grand Bazaar.
Explore the local sites of Istanbul and visit some of the most renowned architecture and its surroundings.