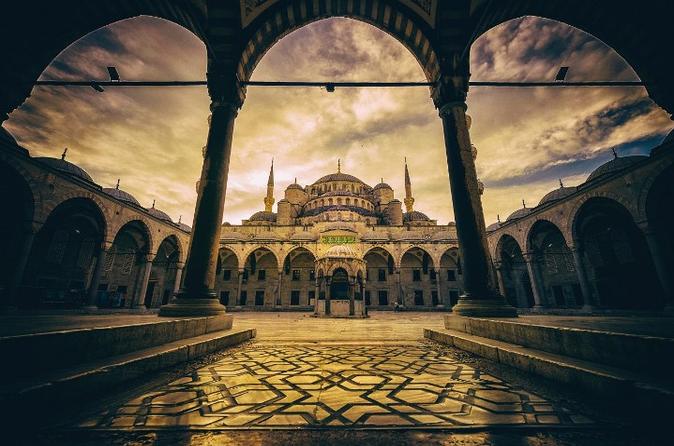 Have an ideal tour to enhance the experience of your journey, including the most famous attractions located in Sultanahmet area, such as Blue Mosque, Hagia Sophia Museum, Hippodrome Byzantine, Basilica Cistern, Topkapi Palace and Grand Bazaar, escorting by a professional and licensed guide.

Meet with your professional and private guide in the lobby area of your hotel at 10:00am

Leave your Hotel in a private, comfortable and air conditioned vehicle, driven by a professional driver to visit the most famous monuments in the old city of Istanbul.

The first stop will be in the Blue Mosque, the biggest mosque of Istanbul and also called the Sultan Ahmet Mosque, which has a special value among others mosques by the fact of having 6 minarets. Enjoy the interior of the mosque, decorated with more than 20,000 tiles and hundreds of meters of woven carpets in the imperial looms.

Continuing the tour, visit the Hagia Sophia Museum, the largest and most sacred work of the Byzantine era because the founder, Emperor Constantine, intended with this greatness construction overcome the Solomon's temple in Jerusalem. The first sentence of Sultan Fatih Mehmet - the conqueror of Istanbul - was held in Hagia Sophia Museum, the first Friday after the fall of Constantinople.

We will follow walking until Hippodrome Byzantine, sporting and social center of ancient Constantinople. The hippodrome was converted into a square (Sultanahmet square) where we find the original structure fragments and important monuments such as the Serpent Column, Stone Column, the Egyptian Obelisk and the German Fountain.

Leaving the Hippodrome, we will visit the Basilica Cistern, built in the Byzantine period with different types of stones and Roman columns, the cistern stored water brought by Valens Aqueduct. Inside the Cistern we find a mystical and curious atmosphere as an example, in the two bases of its columns which represents the Head of Medusa.

Break for a lunch in one of many options of restaurants available in the old city.

After lunch you will discover the Topkapi Palace, old residence of the Sultans and the administrative center of Empire Ottoman. In it are exposed the treasures collected by the sultans: the world-famous Topkapi dagger, the largest emerald in the world and the diamond Kasikci Elmasi with 86 carats.

We will finish the day of tour visiting the Grand Bazaar, one of the most popular commercial center in the world that has thousands of stores and shopping options, divided into 64 streets. Grand Bazaar is not only big in the name; the so-called “Kapali Çarsi” by the Turks, was a key part in the commercial routine structure of this era. In Ottoman period the Grand Bazaar not only works as a market, but also as a stock exchange, bank and slave market.

At the end of the tour your private guide will take you back to your hotel.

Have an ideal tour to enhance the experience of your journey, including the most famous attractions located in Sultanahmet area, such as Blue Mosque, Hagia Sophia Museum, Hippodrome Byzantine, Basilica Cistern, Topkapi Palace and Grand Bazaar, escorting by a professional and licensed guide.