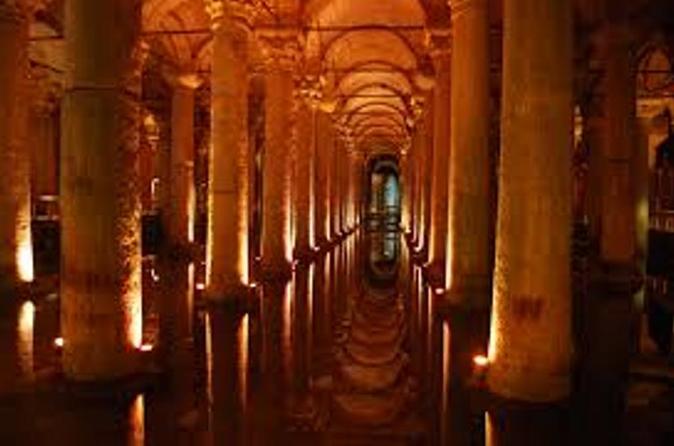 Meet your private guide in the lobby of your hotel. If you're staying in Sultanahmet, you'll set out on foot at 9:30am: if you're staying in Eminonu or Karakoy, your guide will collect you a little earlier and escort you into the Old City on public transport (own expense). As your tour includes a visit to a mosque, please wear loose clothing that covers arms and legs: women should bring a scarf to cover hair.

Your first stop in Istanbul's UNESCO-listed Old City will be the Blue Mosque, Istanbul's largest and most celebrated mosque with its six minarets. Enjoy the spectacular bluework on the tens of thousands of tiles which adorn its glorious interior, as well as the hundreds of woven carpets: it was built for Sultan Ahmet I.

It's just a short stroll to the Hagia Sophia, the largest and most sacred work of the Byzantine era, with a history that dates back to at least the fourth century AD. Sultan Mehmet II, the conqueror of Constantinople, converted it into a mosque and held his first service there on the Friday after the city fell in 1453.

Next, stroll to the Hippodrome, the sporting and social center of ancient Constantinople. Your guide will show you fragments that remain from the original structure, including carved columns and an obelisk, and explain the role that chariot races played in eastern Roman life.

It's a 5-minute walk to another spectacular piece of Byzantine architecture, the Basilica Cistern, an underground reservoir built to store water from the Valens Aqueduct. Lit by flickering lights reflected in dark waters, it's eerie and mysterious, particularly with its Medusa head columns.

Lunch is at your own expense, but your guide can recommend an option to suit your tastes, budget, and dietary requirements from the myriad choices in Sultanahmet.

After you've eaten, enter the world of the Ottoman sultans with a visit to Topkapi Palace, where these powerful rulers lived for centuries. Highlights include the Treasury, which features the emerald-and-gold Topkapi Dagger and the 86-carat 'Spoonmaker's Diamond'.

Round off the day with a visit to the Grand Bazaar, a 20-minute walk from the palace, with its thousands of stores divided into 64 streets. During the Ottoman period, this wasn't just a market, but a stock exchange, bank, and site for slave auctions. Should you wish to shop for classic souvenirs, such as carpets, brassware, and leather goods, your guide will be happy to assist.

Your tour finishes at 4:30pm, when your guide will accompany you back to your hotel.