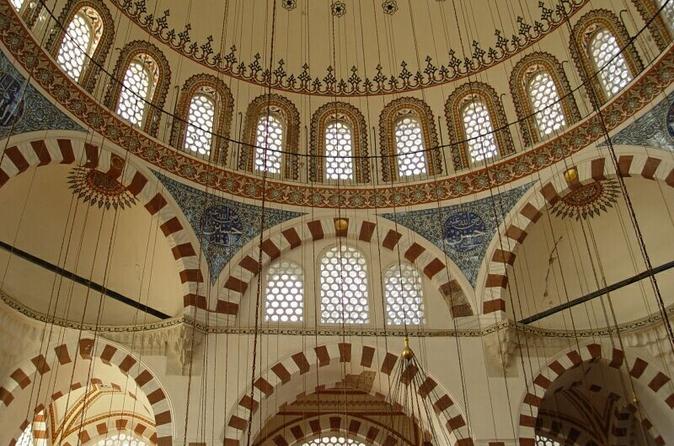 Spend the morning exploring Istanbul's Ottoman past at the enchanting Topkapi Palace and the Blue Mosque.

Blue Mosque:
One of the most famous monuments in both the Turkish and Islamic worlds, the Sultan Ahmet Mosque (also known as the Blue Mosque) is a superb creation in the classical Ottoman style. The mosque has six towering minarets and 260 windows illuminating its vast main chamber, which is decorated with more than 20,000 Iznik tiles.

Topkapi Palace:
The largest and oldest palace in the world, Topkapi was the crown jewel of the Ottoman Empire. With its treasury and exotic buildings overlooking the Golden Horn, your visit to Topkapi promises to be a truly fascinating experience. Note, the Topkapi Palace is closed on Tuesdays.


Hippodrome and Obelisk:
The Hippodrome was once the heart of Constantinople’s political and sporting life, and the scene of games and riots through 500 years of Ottoman history. Today it is a city park called the At Meydanı (Horse Grounds) because of its function in Ottoman times. The Hippodrome includes the 3500-year-old Egyptian granite Obelisk, brought to Constantinople by Emperor Theodosius in 390 AD.

Please note: On Fridays the Blue Mosque will be closed until 2.30pm for prayer, entry will not be permitted

Spend the morning exploring Istanbul's Ottoman past at the enchanting Topkapi Palace and the Blue Mosque.