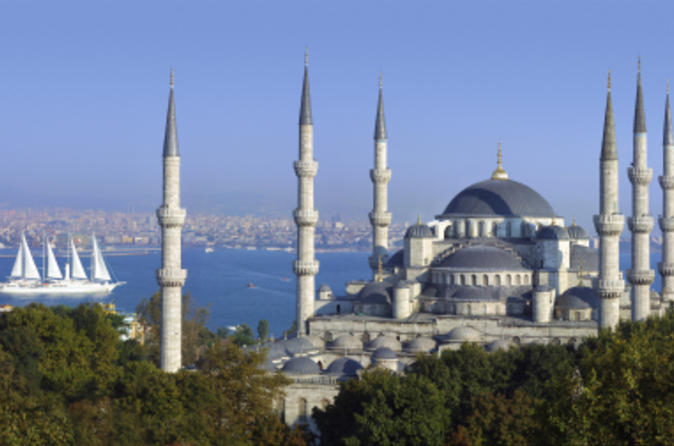 This sightseeing tour of Istanbul provides the perfect introduction to the fabled city that spans Asia and Europe. On this shore excursion you will see how old meets new when you visit Istanbul's four "must-see" historic sites.

Formally called Constantinople, Istanbul was the capital of the Roman Empire and Europe's wealthiest metropolis, and is now the largest city in Turkey.

Blue Mosque:
One of the most famous monuments in both the Turkish and Islamic worlds, the Sultan Ahmet Mosque (also known as the Blue Mosque) is a superb creation in the classical Ottoman style. The mosque has six towering minarets and 260 windows illuminating its vast main chamber, which is decorated with more than 20,000 Iznik tiles.

Hagia Sophia:
Now a museum, Hagia Sophia was built in the 6th century by the Emperor Justinian, and was one of the largest basilicas in the Christian world. After the Ottoman conquest, it was converted to a mosque and is today one of the most magnificent museums in the world. Take a moment to linger here to admire the fine Byzantine mosaics. (closed on Mondays from October 20, 2015)

Topkapi Palace:
The largest and oldest palace in the world, Topkapi is the crown jewel of the Ottoman Empire. With its treasury and exotic buildings overlooking the Golden Horn, your visit to Topkapi promises to be a truly fascinating experience. (closed on Tuesday)

Grand Bazaar:
In operation since the 14th century, the Grand Bazaar is one of the world's largest covered markets, with 58 streets and over 4,000 shops. The bazaar is specially known for its jewelry, leather, pottery, spices and carpets. (closed on Sunday additional time will be spent at the other locations)

Worry-free Shore Excursion:
We will ensure your timely return to the Istanbul port for this activity. In the rare event your ship has departed, we will arrange for transportation to the next port-of-call. If your ship is delayed and you are unable to attend this activity, your money will be refunded. See our terms and conditions for full details.

This sightseeing tour of Istanbul provides the perfect introduction to the fabled city that spans Asia and Europe. On this shore excursion you will see how old meets new when you visit Istanbul's four "must-see" historic sites.