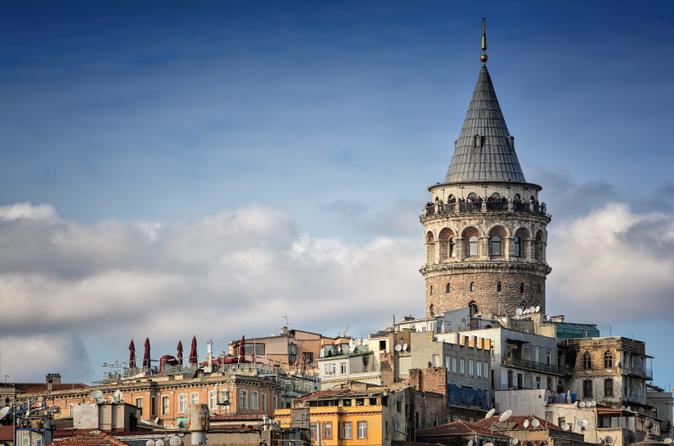 Unforgettable time in Istanbul by visiting Galata Tower, Eyup Mosque, Pierre Loti Hill. Great morning tour offers to reach to top of Galata Tower where you can admire the city view with 360 degrees.

How often in our lives do we see something of such beauty that our heart leaps? And how would one love such moments to be repeated again and again? Each city has its own character and welcomes guests in its own way but only in Istanbul are all of your senses affected by the East. Not only is this city exciting - it is breathtaking and awe-inspiring. Istanbul is a city that envelops you with unforgettable images, legends and history that leech into your very being. It may be difficult to truly understand why and how, but the impressions with which you leave Istanbul will stay in your heart and soul forever. Much of the city is comprised of buildings steeped in history giving the impression of the centuries that have passed. Galata, where it will be the first stop after pick-up from your accommodation, the old part of Istanbul, has witnessed many events and it still meets its guests as it did during the time of the Sultans and Emperors. And it also bids a heartfelt farewell. The moment you reach the top of the Galata Tower is breathtaking. The 63 metre building offers extraordinarily beautiful views of the Bosphorus and the Golden Horn. After you will drive by coach the Golden Horn which is one of the most attractive places in Istanbul and there are numerous legends and stories that surround it.

During the tour you can learn lots about Istanbul. The strong memories that connect Istanbul with its past, constantly remind us of its long history. The city cherishes her memories, occasionally lifts the veil of secrecy to her beloved guests. The story of each of Istanbul’s old buildings is woven into the overall fabric of the city’s historical events. The Eyup Sultan Mosque is a significant building and requires special reverence.

After visiting the mosque you will continue your adventure by driving to the Pierre Loti Café. As you get to know Istanbul intimately, don’t forget about time as it appears to stop when you touch the mysterious world of the East. The Pierre Loti Café is a place of meetings and partings, memories and sadness, inspiration and joy. The Pierre Loti café was named after the French writer (Julien Vio) who often visited the city. Even here Istanbul does not leave its guests but creates special comfort on top of a hill, offering stong tea and unforgettable black Turkish coffee. Listen carefully to the sounds of the city of Istanbul and it will show you how to touch the wisdom of the East that says the memory of drinking a cup of bitter coffee will remain with you for 40 years. After all you will drive back to your accommodation by coach.

Unforgettable time in Istanbul by visiting Galata Tower, Eyup Mosque, Pierre Loti Hill. Great morning tour offers to reach to top of Galata Tower where you can admire the city view with 360 degrees.