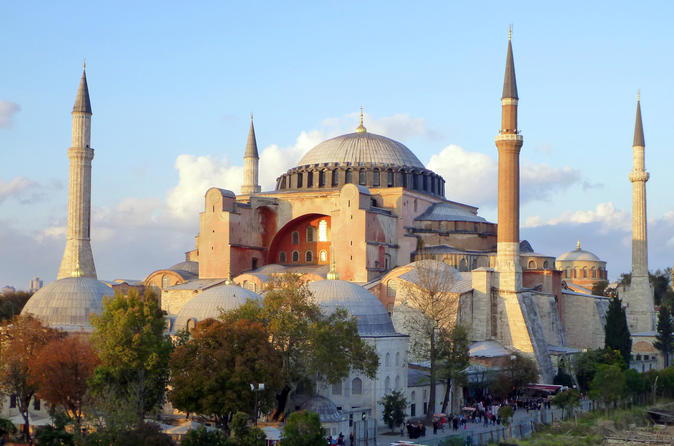 Join this day tour to explore Istanbul city with our professional guide. As nearly sightseeing are closer Instead utilizing private transportation this visit for the most part by strolling and few utilization of public transportation.

Our guide will pick up you around 9am from your hotel lobby centrally located in Istanbul city. Start your day tour by visiting Hagia Sophia, It is a great architectural beauty and an important monument both for Byzantine and for Ottoman Empires. Once a church, later a mosque, and now a museum at the Turkish Republic, Hagia Sophia has always been the precious of its time.

Next, you will see the German Fountain, a gift of Kaiser Wilhelm II and listen the stories of his liaison with the orient.

Move on to Hippodrome, where the chariot races were organized by the Romans and Byzantines.

Continue your tour to Blue Mosque-the only mosque with six minarets. The Blue Mosque was built between 1609 and 1616, by the architect Mehmet Ağa, instructed by Sultan Ahmet I. It was designed as an imperial show of strength to complement the imposing Hagia Sophia, which faces it across Sultanahmet Square.

Proceed your next visit to The huge Topkapi Museum , is a large museum in Istanbul, Turkey. In the 15th century, it served as the main residence and administrative headquarters of the Ottoman sultans. It is an incomparably rich treasure-chest, brimming with things of historical importance.

Next visit is Caferağa Medrese, This lovely little building tucked away in the shadow of Aya Sofya was designed by Ottoman architect Mimar Sinan on the orders of Cafer Ağa, Süleyman the Magnificent's chief black eunuch. Built in 1560 as a school, it now houses a cultural organisation that teaches and promotes traditional Turkish handicrafts. The courtyard is home to the pleasant Caferağa Medresesi Çay Bahçesi tea garden

Pay a visit to Soğukçeşme Street, This street, which created a charming image with its gabled and low-rise historic houses, was used as the residence of palace staff and wealthy families during its era.

Lastly, you will get a photo stop at Hagia Irene Church, This is the oldest church of Constantinople as it is believed to have been built on the site of a temple to Aphrodite prior to Emperor Constantine's decision in 330 to move the capital of the Roman Empire to Byzantium.

Once we complete all the sightseeing we will drop off you at your hotel.

Join this day tour to explore Istanbul city with our professional guide. As nearly sightseeing are closer Instead utilizing private transportation this visit for the most part by strolling and few utilization of public transportation.