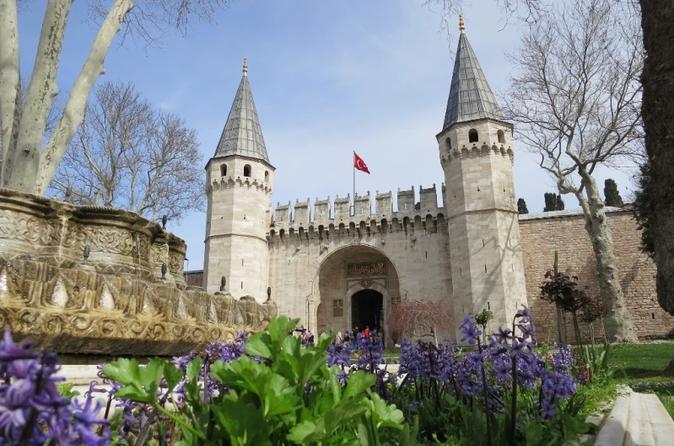 Our well informed tourist guides will pick you up from your accommodations with the shining beams of the sun in the morning. You will stroll around the old city of Istanbul.

Our first destination is Hagia Sophia, the world’s one of the greatest and unique religious structure used  as a mosque,a church and also as a museum. Hagia Sophia is housing two completely different cultures inside it, East and West. When you take a step into the structure you can feel the dance of two opposite civilizations and come across the eye-popping blend of Islamic and Christian influences with extraordinary interior mosaics and an effective history.For more visual description you must witness it with your own eyes, surely you will admire it.

Then our duty is to reconnoitre the other masterpiece, Blue Mosque, built in early 1600s for Sultan Ahmet, and fort his reason known as Sultanahmet Mosque in Turkey. Words are inadequate to explain its magnificence and beauty. With its sequental domes and sin slender minarets, Blue Mosque dominates the skyline of Istanbul. The blue shade of the 27.000 pieces of Iznik quart tiles, giving the mosque its famous name, are very much worth to see.

We are going on exploring the ancient remains of Constantinople. Our next station is the Hippodrome with its 4 monuments – the German Fountain of Wilhelm II, the Obelisk of Theodosius, the bronze Serpentine Column, and the Column of Constantine. Because of Byzantine emperors’ passion for chariot races in thre afternoons, the Hippodrome was the changeless center of sportive and political activities in Constantinople for 1000 years.

Are you ready to be astonished at Topkapi Palace, because it has many bewildering sides different from most of the world’s museums. Topkapı Palace was the administrative, educational  and art center of the Ottoman Empire for 400 years. It is a great sample of oriental architecture and includes a variety of activities such as exhibitions of art, books, jewels, plates, costumes, the treasury, and the Holy Relics. More than just an Imperial Residence of the Ottoman Sultans, it was the seat of the Supreme Executive and Judiciary Council for almost 400 years.

Our last station is the Grand Bazaar, Turkey’s the largest covered market at the heart of the Old City, offering excellent shopping. It has lots of shops in it, and you can find almost whatever you want, such as beautiful Turkish carpets, pottery, tiles, cotton, wool and leather products and so on. This part of the tour is optional,  either you can turn back to your hotel with your guide or stay there.

Our well informed tourist guides will pick you up from your accommodations with the shining beams of the sun in the morning. You will stroll around the old city of Istanbul.