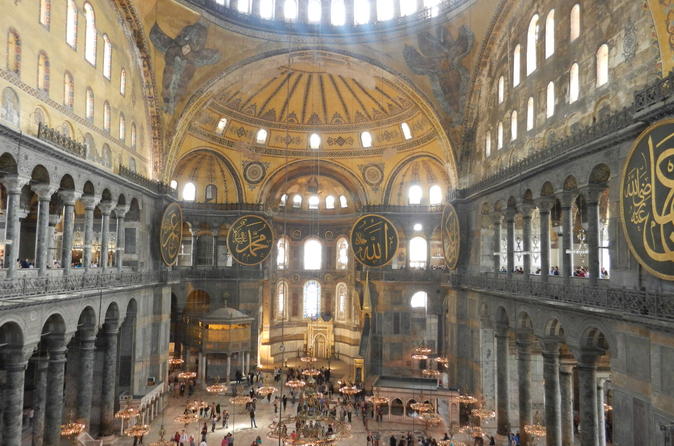 With this private tour explore magical Istanbul "City of Sultans". Enjoy a day of history and sightseeing of Old Istanbul.

Istanbul "The City of Sultans" gives you an opportunity to discover the history of Byzantine and Ottomans.

The Hagia Sophia is an ancient Basilica, started by Constantine the Great in the 4th century and completed by Emperor Justinian in the 6th century.

For a thousand years the Hagia Sophia was the world’s largest cathedral, and today it has been converted to a museum. The basilica has a stunning dome and minarets, and is home to countless beautiful mosaics, paintings, sculptures and columns.

Another architectural masterpiece, inspired by the Hagia Sophia, will be our next stop on the tour. The Sultan Ahmed Mosque, also known as the Blue Mosque, is one of the most famous sights of Istanbul.

Completed in 1616, the mosque gets its name from the vibrant blue tiles that adorn its interior walls. The Blue Mosque has rightly become one of Istanbul’s major attractions, known also for its beautiful courtyard, and six impressive minarets.

From there we will continue to the nearby ancient Hippodrome, the host of chariot races during the Byzantine period. Here we can admire the three remaining monuments at the site, the Obelisk of the Theodosius, the Serpentine Column and the Column of Constantine.

Our last stop will be Istanbul’s amazing Grand Bazaar. In this maze of covered streets and passages you will find more than 4,000 shops selling countless products, especially jewelery, pottery, spices, carpets, and leather.

With this private tour explore magical Istanbul "City of Sultans". Enjoy a day of history and sightseeing of Old Istanbul.