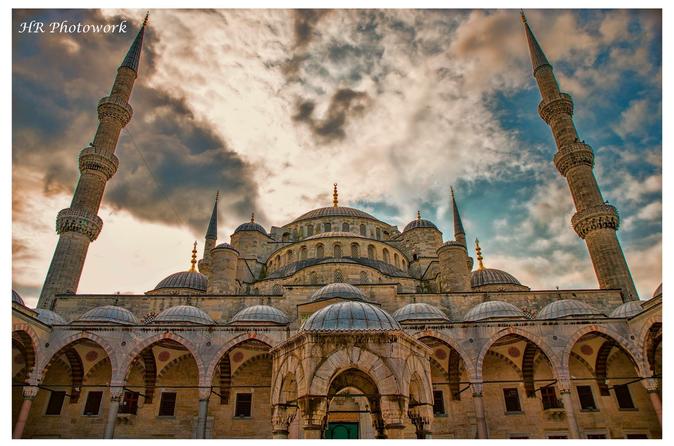 Your private tour of Istanbul begins with pick-up from your central Istanbul hotel by your local guide. Day one kicks off with a walking tour through Sultanahmet, the heart of historic Istanbul, and a visit to Hagia Sophia, one of Turkey’s most magnificent monuments. Head inside to explore the magnificent basilica-mosque that was once the world’s biggest church, and marvel at the Byzantine and Ottoman treasures housed in its museum. A short walk from Hagia Sophia is the famous Sultanahmet Mosque, nicknamed the ‘Blue Mosque’ thanks to its striking blue tile mosaics. After admiring the lavish interiors of the Blue Mosque, continue to Topkapi Palace, where you can walk in the footsteps of the great Sultans, peek into the harem and relive the glory days of the mighty Ottoman Empire. Make a stop for lunch (own expense), before exploring the Roman Hippodrome, which was built in 203AD, and marvel at ancient monuments like the Egyptian Obelisk, the Serpentine Column, and the Constantine Column. Finally, make your way through the labyrinth stalls of the Grand Bazaar, one of the largest and oldest covered markets in the world. With hundreds of small handcraft shops selling everything from handmade carpets to Turkish coffee, the atmosphere is electric, and it's a great place to try out your bargaining skills.  After a full day exploring the city, your guide will escort you back to your hotel.