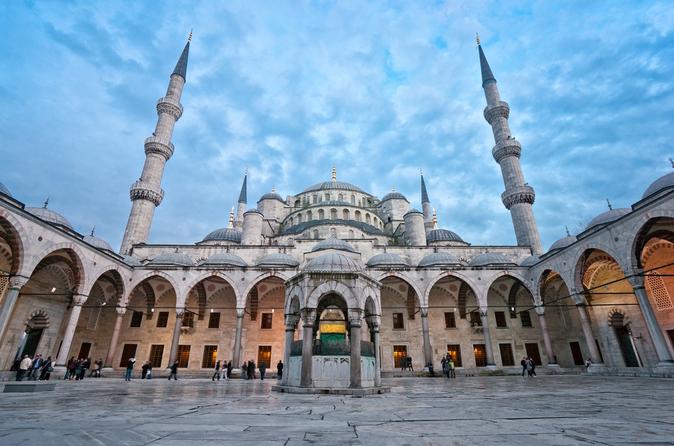 Take a hassle-free tour of Istanbul's most famous attractions with your own private guide to lead the way. You'll enjoy personalized attention on your private tour of magical Istanbul and its signature sights: the Blue Mosque, Hagia Sophia, and Topkapi Palace.

On this tour you will visit the following historic sites:

Blue Mosque:
Just across from the Hippodrome, the Sultan Ahmet Mosque (also known as the Blue Mosque) is a superb creation in the classical Ottoman style. The mosque has six towering minarets and 260 windows illuminating its vast main chamber, which is decorated with more than 20,000 Iznik tiles.

Hagia Sophia:
One of the finest and largest architectural works of art in the world, this former basilica and mosque is now the Saint Sophia Museum. Many historians have nominated it as the 8th wonder of the world. Take a moment to linger here to admire the fine Byzantine mosaics.

Underground Cistern or Nakkas Cistern:
The Basilica Cistern (Yerebatan Sarayı), is the largest of several hundred ancient cisterns that lie beneath the city of Istanbul. The cistern, located 500 feet (150m) southwest of the Hagia Sophia on the historical peninsula of Sarayburnu, was built in the 6th century during the reign of Byzantine Emperor Justinian I.


Topkapi Palace:
The largest and oldest palace in the world, Topkapi is the crown jewel of the Ottoman Empire. With its treasury and exotic buildings overlooking the Golden Horn, your visit to Topkapi promises to be a truly fascinating experience. (Closed on Tuesdays; will be replaced with Istanbul Archaeology Museum)

Hippodrome and Obelisk:
The Hippodrome was once the heart of Constantinople’s political and sporting life, and the scene of games and riots through 500 years of Ottoman history. Today it is a city park called the Horse Grounds (At Meydanı) because of its function in Ottoman times. The Hippodrome includes the 3500-year-old Egyptian granite Obelisk, brought to Constantinople by Emperor Theodosius in 390 AD.

Grand Bazaar:
In operation since the 14th century, the Grand Bazaar is one of the world's largest covered markets, with 58 streets and over 4,000 shops. The bazaar is specially known for its jewelry, leather, pottery, spices and carpets. (Closed on Sundays; additional time will be spent at the other locations.)

*On Mondays from (October 20, 2015) when Hagia Sophia is closed, this visit will be replaced with a similar museum.

Take a hassle-free tour of Istanbul's most famous attractions with your own private guide to lead the way. You'll enjoy personalized attention on your private tour of magical Istanbul and its signature sights: the Blue Mosque, Hagia Sophia, and Topkapi Palace.