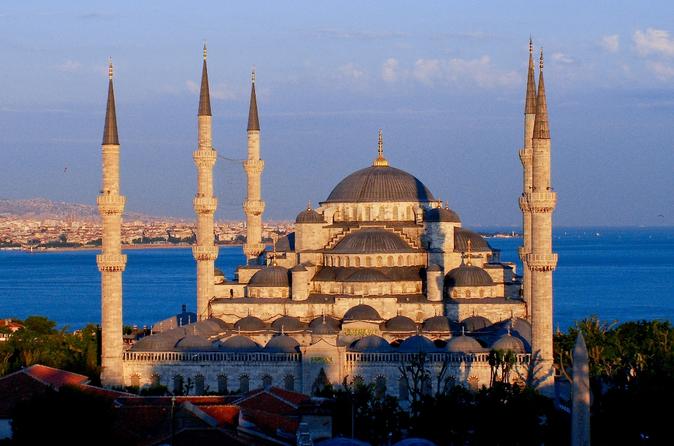 On this private half day tour of Ottoman monuments, you will be able to visit the following sites:

You will meet with your professional guide and and start your private half-day of sightseeing in Istanbul.

First, you will take a short walk to the Blue Mosque, completed in 1616, it is a triumph of harmony, proportion and elegance.  The mosque was a part of a complex also including, tombs, fountains, kitchens, and a bath. Its colourful 260 windows enables the sunlight to reach inside. This makes the interior unusually light.  The blue Iznik Tiles covering the walls have given the mosque its popular name, Blue Mosque.

You will visit the magnificient Topkapı Palace, the residence of the sultans for almost three centuries.  It is located on the promontory jutting out between the Bosphorus and the Golden Horn.  This setting provides a magnificent view.  The construction of the Topkapı Palace was completed between 1465 and 1478.  Being the imperial residence of the sultan, his court and harem, the palace was also the seat of government for the Ottoman Empire. 4,000 people lived in the Palace. In the Treasury section, you will see breathtaking displays, including the 7th largest diamond in the world, the “Spoonmaker’s Diamond”.

Last, you will explore ninety-two streets of  the famous Grand Bazaar. The Grand Bazaar is the largest and oldest covered Bazaar in Turkey with more than 4,000 shops. A variety of Turkish Handicrafts, Oriental carpets, rare jewels and inexpensive souvenirs all sold in small shops next to each other.  The streets are named according to the trades, such as gold and silver sellers, carpet sellers, booksellers, etc. The most oriental atmosphere in Istanbul is found in the bazaar.

At the end of your sightseeing, you will return to your hotel/ship.

On this private half day tour of Ottoman monuments, you will be able to visit the following sites: