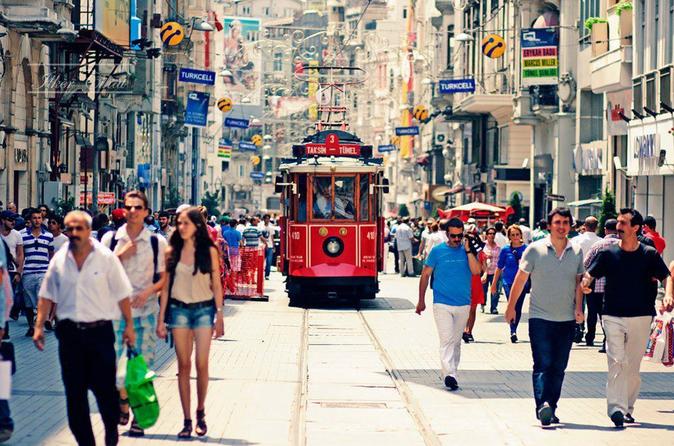 Pera, Taksim
Being separated from the Old Town of Sultanahmet by the Golden Horn straight; the district was known as "Pera" meaning "Across" in Greek during the Middle Ages. This name remained in common use until the early 20th century and the establishment of the Turkish Republic. With it's shops, café's, bars, art galleries an so much more today known as "Beyoğlu", the district is creating the "beating heart of Istanbul". And it's heart never stops...

The avenue, surrounded by late Ottoman era buildings (mostly from the 19th and early 20th centuries) that were designed with the Neo-Classical, Neo-Gothic, Renaissance Revival, Beaux-Arts, Art Nouveau and First Turkish National Architecture styles; as well as a few Art Deco style buildings from the early years of the Turkish Republic, and a number of more recent examples of modern architecture; starts from the medieval Genoese neighbourhood around Galata Tower and ultimately leads up to Taksim Square.

Secret Gangways
Pasaj is a word adopted by Turkish from French; meaning "Gangway". The norm of a Passage is, apart from being a gateway from one street to the other is that they are usually surrounded by shops and café's. Beyoğlu is home to few of the most famous Turkish passages. Atlas Pasajı, Çiçek Pasajı, Hazzopoulo Pasajı, Aznavur Pasajı and so many more. On this tour I will take you through and to many of the secret passages of Istanbul, you would not explore on your own and give you a totally different view on the city..!