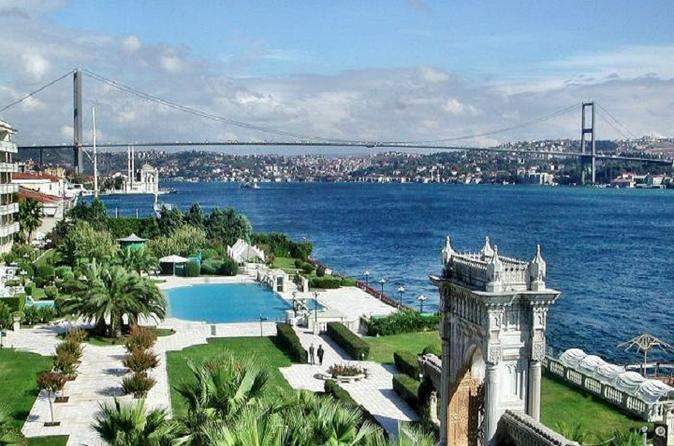 Your visits will be to the following sights with an experienced and licensed professional guide. Pick up at around 08:30 from either your Istanbul hotel or the Istanbul cruise port is included.

Enjoy breakfast at your hotel or in the town before starting your full day Istanbul small group city tour.

Start the day visiting Cable Car to Pierre Loti: Enjoy the beautiful view from the cable car as you climb the hill to the cafe named for the famous French writer and naval officer, Louis Marie Julien Viaud a.k.a. Pierre Loti (1850 -1923), who wrote fiction based on his experiences in Istanbul.

Next we will cruise on the Bosphorus to allow you the prime perspective from which to view the fine palaces, pavilions, Ottoman houses and seaside neighborhoods along the shores of this famous and historic waterway connecting the Black Sea and the Maramara Sea.

The Marmaray provides a unique chance to make a link between the European and Asian continents by train in a sub-sea tunnel (resting upon the sea floor beneath the waters of the Bosphorus Strait).

The giant rail system of Istanbul's Marmaray Project was inaugurated and opened on October 29, 2013 following four years of construction delays that were largely due to the discovery of ruins dating from the Hellenistic, Roman, Byzantine and Ottoman periods.

Rumeli Fortress (From the sea) is the largest fortification for the protection of Istanbul built by Sultan Mehmet II in 1451 before his conquest of the city.

Rustem Pasha Mosque a majestic and surprising little mosque was designed by the most famous of Ottoman architects, Mimar Sinan, for the Grand Vizier Rustem Pasha who had married Princess Mihrimah, one of the daughters of Sultan Suleyman the Magnificent. Its construction took place from 1561 to 1563.

A nice luncheon will be served in a quaint local restaurant.

Basilica Cistern Built by Justinian after 532, the Basilica Cistern stored water for the Great Palace and nearby buildings. Lost to memory, it was rediscovered in the mid sixteenth century by Petrus Gyllius, who had been sent to Constantinople by the French King Francis I in search of Byzantine monuments and manuscripts.

The Hagia Sophia that you can visit today was the primary church of Byzantine Constantinople and was built upon the site of two earlier churches that had been destroyed.

Sultanahmet Mosque/Blue Mosque was built by Sultan Ahmet I between 1609 and 1616 and is located in the district of old Istanbul that is named after this Ottoman Sultan and it is distinguished by its six slender minarets.

The ancient Hippodrome was the center of Byzantine social life and the scene of fiercely competitive chariot races.

After the tour, you will be returned to your hotel.

Your visits will be to the following sights with an experienced and licensed professional guide. Pick up at around 08:30 from either your Istanbul hotel or the Istanbul cruise port is included.